6. The Wabbit and the Holodeck Suite 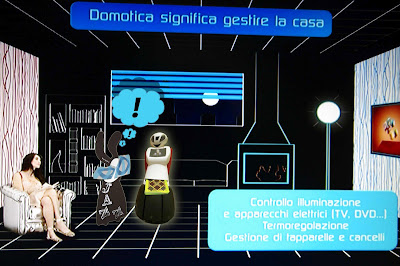 The Wabbit's hour of shrunkennness was up. Suddenly he found himself normalised but in a most unfamiliar location and looking directly at Robot. The Wabbit could say just one word. "Where?" he uttered in a voice that began as a squeak and ended as a roar. "Don't worry Wabbit. Have you got the data?" said Robot. "I certainly have and you've no idea what a pesky task it was," grumbled the Wabbit. Robot took the ceramic memory stack and inserted it into a port in his front. "So where is this?" said the Wabbit again in a more affable tone. "This is the Holodeck suite," replied Robot as if there had always been one. "How did it get here," asked the Wabbit. "I requisitioned it," said Robot. The Wabbit slapped a paw to his forehead. "Who signed?" he said simply. "Lapinette, Commander," "Oh good," said the Wabbit and he smiled and clapped his paws. "At least it wasn't me." Robot remained silent as he wrote data to his memory and then he nodded sagely. "Excellent data. Now I can begin work on the problem in hand." The Wabbit did not care to admit that he neither knew what the data was nor was he sure of the exact nature of the problem in hand. "Yes," he said, "that will sort the matter out entirely." "The Agents of Rabit will rue the day that I asked for this data," said Robot. "Of course," said the Wabbit and he looked all around. "Who's that woman?" he asked finally. "I really don't know," said Robot, "she came with the Holodeck." "Well, where did you get the Holodeck?" murmured the Wabbit." "e-Bay," said Robot.
at June 14, 2012