3. The Wabbit and the Data Swarm 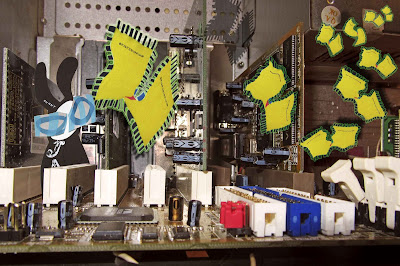 The Wabbit hopped inside the old computer and hadn't been there for more than a minute when he heard a sound that was midway between a droning and a humming. Without warning, yellow winged creatures poured like bats from a hidden corner and then flapped around. The Wabbit's well-known antipathy for winged things surfaced immediately and he hopped from one foot to another. "Oh why did it have to be winged things? Why not snakes for instance?" he appealed to no-one in particular. But the swarm was heading directly for the Wabbit with little respect for his sensibilities. "Produce your data now!" cried the lead creature. "I come in peace," said the Wabbit, quietly feeling under his fur for his automatic. "We are the Data Swarm, we need data," said the lead creature. "I seem to have left all my data in my other coat," said the Wabbit, patting his fur. "Give us data!" they cried and they hummed and droned loudly. The Wabbit spoke the first thing that came into his head. "Torino Football Club was promoted to Serie A after a 3 year absence," he said with a smile. "That's good data," said a creature at the rear and the winged ones droned for a while as they assimilated the new information. "I'm looking for lost data," ventured the Wabbit. "We take data, we don't give it away," snarled the chief creature. "Give me back my data!" yelled the Wabbit suddenly. "You will be assimilated along with all your soccer knowledge," threatened the creature. "You'll be rather disappointed" said the Wabbit.
at June 08, 2012