4. The Wabbit and the Fun of the Fair 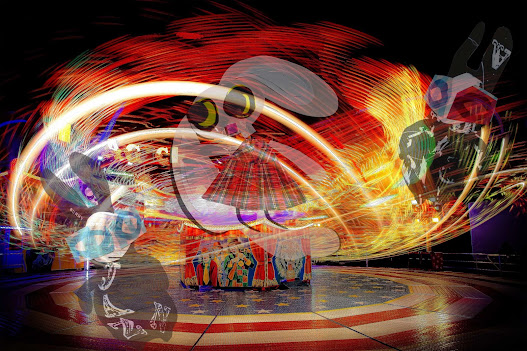 Wabsworth beckoned the Wabbit and Lapinette through the entrance way, but on entering they were caught in an amazing whorl of coloured lights. A carousel tossed Lapinette  high in the air. The Wabbit was swept around at ground level. Wabsworth flew up on beam of light and his eyes changed colour. "Whoah," said the Wabbit, "Who switched the lights on?" Lapinette mouthed "Wheeee!" but she had no control of her voice. "Welcome to the Amusement Park," shouted Wabsworth. His glasses changed colour from blue to red - and back again. The Wabbit span one revolution then, still spinning, changed direction. But it gave him time to think. Lapinette would, under no circumstance, ever shout "Wheeee!" He also knew that Wabsworth didn't have a great sense of humour. The Wabbit figured they were in the grip of carnival magic, mobilised by an entity of some kind. He thought hard. He was low down and possibly his feet were out of range. He found he could control them. So placed them firmly on the ground and pressed. Gradually the carousel slowed a bit at a time. Every time he made a revolution, the Wabbit slowed it down a bit more. Lapinette dropped until she reached the floor. Wabsworth's eyes became normal. Finally, the carousel ground to a halt. Lapinette was more than dizzy and she staggered in a drunken fashion. "Tell me I didn't shout 'Wheeee.'" The Wabbit shrugged and smiled "We've all got our problems." Wabsworth lurched from side to side. "That nearly fried my circuits!" "How's does your eyesight check out?" asked the Wabbit. "Don't it make my brown eyes blue?" sang Wabsworth.
[Background image: Frank Winkler, Pixabay]
at October 03, 2022