2. The Wabbit and Skratch in the Blast 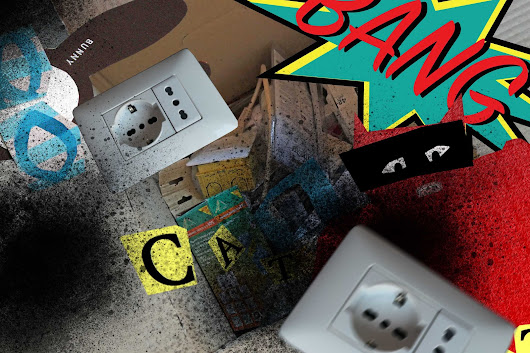 They hauled the box home so that they could examine it at leisure. Despite Skratch's reassurance that the box was empty, they found otherwise. The Wabbit spied lamps of various - all of them from China - and a few electric fittings. "What say you now, Skratch?" "I thought the box was rattling a bit. They don't weigh much, those things," said Skratch. The Wabbit had a funny feeling they shouldn't have taken the box for granted. He reached inside and grabbed a lamp. "Perfectly normal lamp, nothing strange," said Skratch. But he had a crawly feeling in his tummy that all wasn't right. "Best be a little careful with that one," he said. He pointed at the socket fitting. "It looks OK," said the Wabbit, "I really could use one of these in the shed." He seized it rather roughly. Skratch became aware of a familiar smell. "Do you smell burning?" he purred. The Wabbit hesitated and let go of the socket. "Do you mean like a light fitting when the plastic deteriorates?" Skratch nodded. They both began to retreat as they heard sizzling and buzzing. "I think it's best to put some distance between us and the box." The Wabbit recalled the time when he'd mixed filler the wrong way round. It got so hot he'd thrown it over a wall and cowered in terror from the blast. The Wabbit screwed up his nose and shrugged. But they were too late. The fitting exploded in a shower of acrid black particles. They coughed and spluttered and wheezed and ran. They were both covered in black and smelled to high heaven. "How do we explain this to Lapinette?" murmured the Wabbit.
at October 20, 2022