4. The Wabbit and Lapinette's Assistance 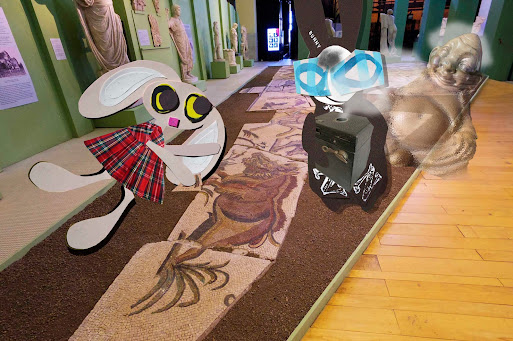 Lapinette was helping the museum with an ancient mosaic when the Wabbit hopped in. "Mind where you tread, Wabbit!" she yelled. "This is very old." The Wabbit wrinkled his nose. "So is this." He held up the box camera which continued to smoke. Lapinette put down a piece of mosaic and looked up. Behind the Wabbit was a strange shape. "There!" said Lapinette. "There, where?" responded the Wabbit. He looked straight at Lapinette. "At your back," she groaned. The Wabbit half turned. The vapours had turned into a genie of sorts. Or so the Wabbit figured. "A genie. It looks like the Buddha." The figure grinned. A quavering voice began. "I can take many forms." Lapinette stood now, with paws on hips. "He's not the Buddha." The mist shivered and the figure became more solid. "Only the cats know," he uttered. The Wabbit shrugged. "I should have brought Skratch. He knows all sorts." Lapinette brushed fragments of mosaic from her knees. "What if I sweep the dust and see the Buddha?" The Wabbit caught on. "The Buddha has no country. Where can you see him?" Lapinette was quick. "The Wabbit is one hundred steps ahead of me." The Wabbit shrugged again. "Then I must brandish my sword." The shape cleared and its voice shook the museum. "No need Wabbit, I'm rumbled." Lapinette sat down. "Maybe he is the Buddha." The Wabbit turned around so he could see him. "Why were you inside a camera?" The figure smiled. "Who put me there?" Lapinette smiled too. "Perhaps he didn't answer a koan." The Buddha shook his head. "Maybe he did answer it."