3. The Wabbit and the Chequered Door 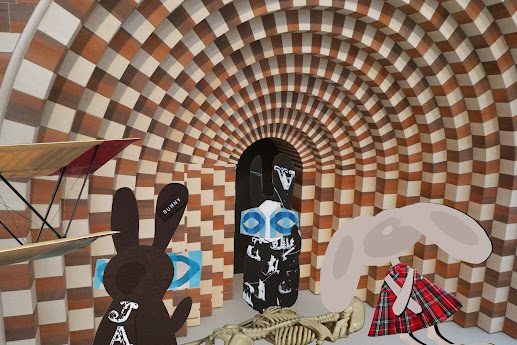 Susan the Biplane made an approximate landing and the Wabbit and Lapinette lurched out. A skeleton lay across the doorway. "Its bones have bleached in the sun," murmured the Wabbit. "Look!" said Lapinette. A familiar figure sauntered from the doorway. "Wabsworth!" yelled the Wabbit. "What are you doing in these parts?" said Lapinette. "How did you get here?" asked the Wabbit. Wabsworth stopped and spread his paws wide. "I was just doing a small experiment in our shed - and there was a sudden flash." The Wabbit gave a snort. "Any models involved?" Wabsworth was an android and not given to much emotion. But on this occasion he tapped into his 'surprised' algorithm. "As it happens, yes - there were models involved. Kendall Jenner came round for a cup of tea." He laughed in a silly way. The Wabbit and Lapinette figured the event had gone to Wabsworth's head. Lapinette placed her paws on her hips. "What about the skelingtron?" she asked. "I've no idea, he doesn't say much." The Wabbit jumped forward, reached behind Wabsworth and pressed a button that Wabsworth kept very secret. He shook his android head. Even a partial reset was hard on his system. "Where the binky am I?" He looked down and saw the skeleton. "Ah! I do recall," he said. He looked at the Wabbit. "He's from the ghost train." Lapinette jumped up and down. "So what's inside that building?" Wabsworth gave a snort. "An Amusement Park."