5. The Wabbit and Two Thousand Turns 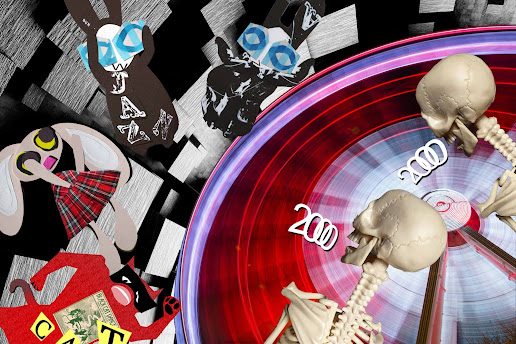 The carousel didn't stay stopped. There was a sudden jolt, and they were stuck to the wall of death. Two skeletons watched and laughed as the Ferris wheel whirled. Or was it a roulette wheel? It looked like a Ferris wheel, but it had numbers. Skratch had joined them from somewhere, but no-one knew how. "How did you get stuck here Skratch?" called the Wabbit. "I was just loping along, minding my own business," said Skratch. "Then I was here." Lapinette's lips were enormous with astonishment. "I know. It's our two thousandth anniversary!" The wall span without mercy, faster and faster. Wabsworth knew exactly what was going on. "Two thousand episodes!" The Wabbit grimaced. "And here we are in danger again." They stuck to the wall like swords in rusty scabbards. "That's what we do," said Lapinette. "But why the skeletons?" demanded Skratch. The skeletons giggled and laughed again. "We're the skeletons in the cupboard," shouted one. "I always wanted one," said Lapinette, "but two is too many." The skeletons roared. "We were two thousand skeletons. But that's too many for a picture." The Wabbit tried to drag himself from the wall. "If the wall was wet, we'd just slide down." "A bit like your bad jokes," chuckled Wabsworth. "Eat the Peach," meaowed Skratch. They looked at him in confusion. "It's an Irish film about a Wall of Death." Wabsworth laughed. He'd consulted his film archives. "To finance it they smuggled pigs, videos and booze across the border." The second he explained, the skeletons vanished ... and the wall slowed to a stop.