3. The Wabbit and the Camera in the Box 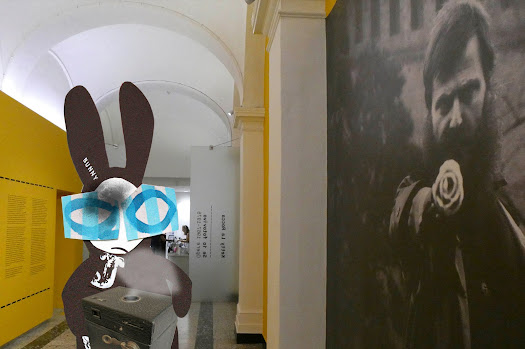 After the blast there was only one thing left in the box. It wasn't Hope as Skratch had suggested, but a box camera labelled Kodak 120. The Wabbit tried to open it but couldn't. "It has to open," he thought, " otherwise they wouldn't get the film inside." After much twisting and pulling he decided to take it to the photo museum where he thought they know something about the camera and where it came from. He was entirely wrong. The staff were clueless about the camera, other than the model - it was a Kodak Portrait Brownie 120. They insisted they only knew about pictures it might have taken and suggested he look at the exhibition for ideas. The Wabbit shrugged. But since he was there, he decided to examine the exhibits. It was mostly about Ketty la Rocca, who was an avant garde photographer. He decided her work was more in Skratch's line of expertise. He sniffed. There was something in the air. He looked down. A puff of vapour came from the camera lens. Then another. Soon a steady stream of vapor jetted from the camera. It was also getting hot. The Wabbit tried to put it down, but his paws were stuck fast. "I'd better get this out of here," he thought. He dashed from the museum and took off down the road at some speed. Then he heard a voice from inside the camera. "Let me out at once!" The Wabbit couldn't oblige. "I'm afraid it's stuck," he said," so I can't open the camera." The voice spoke again. "Take it to someone who can." The Wabbit thought hard. When he had difficulty, he usually took things to Lapinette. He broke into a run. "On my way," he breathed.