6. The Wabbit and Susan's Flight 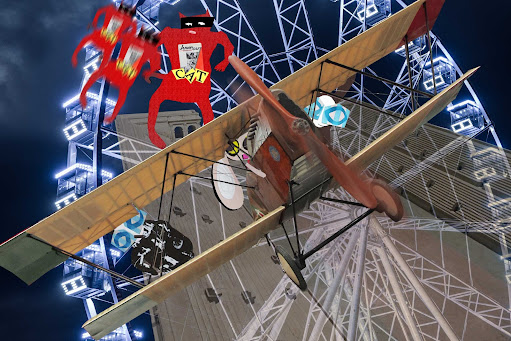 Lapinette and the Wabbit fled for the Plane. Wabsworth and Skratch were close behind. Susan the Biplane took off smartly - a little too smartly. "Go around Susan," said the Wabbit. He smiled "We can't leave them here." Wabsworth and Skratch climbed the Ferris Wheel and just when they were level they jumped. Skratch made an issue of it and plummeted toward Susan. He landed heavily on the fuselage. Susan groaned. "You need to lose weight, Skratch." His purr could be heard above the noise of the engine. "That's just for show, Susan." Wabsworth grinned, clung onto the struts and said nothing. He was an android and just too cool for boasting. Lapinette circled above the fairground. She could make out the outline of a Roman Circus. "Want to go back down and explore?" The Wabbit snickered with his 28 teeth. "I've been to the circus before." Up ahead they could see the faint outline of Eur. "That's impressive enough for me," said Wabsworth. "Wanna go to Luneur Park?" said the Wabbit. His sarcasm wasn't lost on Lapinette. "You sure know how to show a bunny a good time." Susan changed direction. "We're going to Shangri-La." Lapinette laughed. "A quiet and shady oasis in palatial surroundings." Skratch was nonchalant. "It also does a mean Prosecco." "And lovely cocktails," added Lapinette. "What are we waiting for?" said the Wabbit. "Waiting for traffic to clear on Via Cristoforo Colombo!" said Susan. "Don't give it any latitude," quipped the Wabbit.
[Ferris wheel by leonhard niederwimmer Pixabay]
at October 07, 2022