The Wabbit Heads for the Adventure Caffè 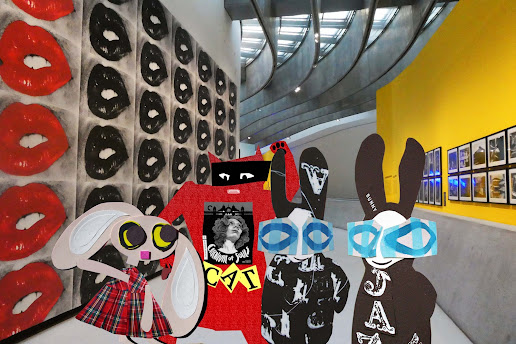 The team made its way to the Caffè at the Museum of Modern Art. But there were so many interesting exhibits that it was mistaken for one. "Hang on there!" said a voice. "I'd like a photograph." The Wabbit chuckled and so did everyone else. Then they all deliberately looked in different directions. "That's so chic," said a female voice. "How do they do it?" said another. "Animatronics," said the first voice. The team gave sickly smiles and went on. "Give me a kiss," said the Wabbit. "Certainly not," answered Skratch. "Save these kisses for me," quipped Lapinette. "Oh, I feel left out," said Wabsworth. The Wabbit puckered his lips and looked at Wabsworth. Wabsworth corrected himself and changed the subject. "So Skratch. What was that for a sort of adventure?" Skratch drew himself up to his full height. "As we can see here, seeing comes before words. The Adventure was a way of seeing. Carnivals involve both sight and sound but seeing comes first." Lapinette was quick to respond. "That was John Berger." Wabsworth was not to be left out. "And also Walter Benjamin. Art in the Age of Mechanical Reproduction." The Wabbit nodded sagely. "The image also proposes reciprocity. The photographers saw us. We saw the photographers." Lapinette had been mulling everything over. "The Amusement Park places the subject in a system of lights - at night." Skratch became wistful and meoawed. "Unremarkable during the day." Lapinette frisked along. "We're remarkable all the time." The Wabbit considered that. "More remarkable if we have a Prosecco. Where's that Caffè?" Lapinette jumped in the air. "Where we came in!"