6. The Wabbit and the Bejeweled Rabbits 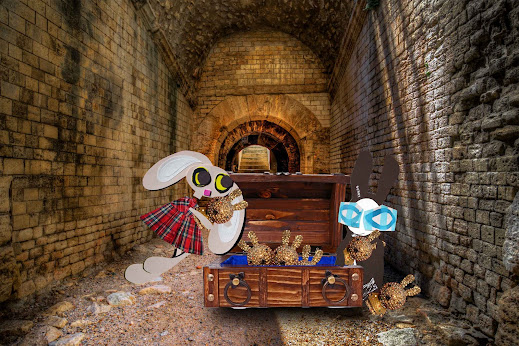 The Wabbit and Lapinette dragged the chest to the middle of the corridor and inspected the contents. It was a surprise. There, in a plush velvet lining, lay several bejeweled rabbits. The Wabbit plucked one out - and so did Lapinette. They examined them closely. "So much for legend," shrugged the Wabbit. "They seem real enough," said Lapinette. They looked the corridor up and down. "This is a long way from Wablantis," observed the Wabbit. "Very far," said Lapinette. The Wabbit thought for a long time. "Maybe there's a second Wablantis. Like a mirror of the first, but here on Proxima b." Lapinette shook her ears. "What cunning shaman did this?" "Maybe the electric shaman? He has the guile." Lapinette's ears froze. "What's that sound?" The rabbits were talking to each other in a strange language. Not even the Wabbit's universal translator could decipher it. They spoke in whispers and appeared to agree with each other. The Wabbit lifted one up and held it close to his ear. Lapinette did the same. The whispering continued. "I can't make head nor tail of it," said the Wabbit. Suddenly the rabbits mimicked his voice. "Neither head nor tail, head nor tail." They chirruped in a sweet chorus. The Wabbit tried his luck again. "How did you get here?" They chanted as one. "We came came came, on the train train train." The Wabbit looked at Lapinette and did that thing that he did when he was puzzled. Lapinette took over. "Which train train train?" The rabbits put their heads together. "The chocolate train." The Wabbit frowned. "It's a mystery." The rabbits chirruped again. "Mystery mystery mystery." Lapinette sighed. "It's all becoming clear." The Wabbit was none the wiser. "You recall the mystery bus?" said Lapinette. The Wabbit slapped a paw between his eyes. "Not the chocolate rabbit!" "The very same," breathed Lapinette.