5. The Wabbit and the Vaulted Cellar 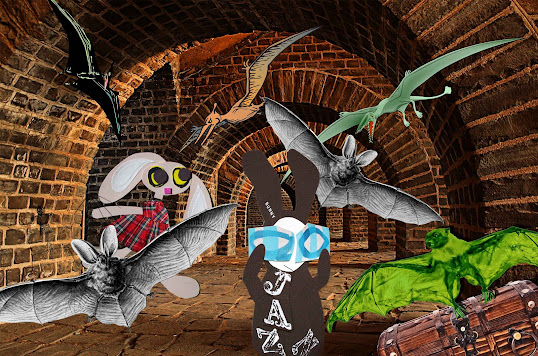 The Wabbit and Lapinette hopped down the gloomy passageway without event. But as they rounded a corner Lapinette shrieked. "Get down. Bats!" It wasn't just bats, but a series of pterodactyls that pecked at the Wabbit and Lapinette with pointed beaks. "Gerrof!" shouted the Wabbit. The bats were huge and didn't appear dangerous. But they seemed drawn to the Wabbit. They flapped around and got in his fur. "J'aime pas les chauves-souris," howled the Wabbit. He batted them away. Lapinette made her way into the main corridor. "What's that?" She pointed. "It looks like a Treasure Chest!" breathed the Wabbit. "Guarded by a large green bat," observed Lapinette. She shuddered. The Wabbit marched up to the chest and addressed the green bat. "Would you mind? he said politely. The bat tightened its grip on the chest. "I say. I want to open that box." Politeness wasn't working. The bat gripped the chest even more. It turned to the Wabbit and made a series of clicks and pings. "I think it's the guardian of the chest," said Lapinette. The Wabbit nodded. He fished in his fur, then looked up. "Got any insects?" Lapinette shook her head. "They might be mega bats," she suggested. The Wabbit shrugged. "I'll try it on fruit." He took out an old and forgotten avocado and rolled it on the passageway floor. The bat released the chest, fluttered down, ate the avocado in a single gulp and fluttered back up again. But the Wabbit was quicker. He hooked his foot around the lid of the chest and flicked it open. "Ooooh!" breathed Lapinette. "It's treasure and I don't think it's lost," grinned the Wabbit.