1. The Wabbit's Archway to the Stars 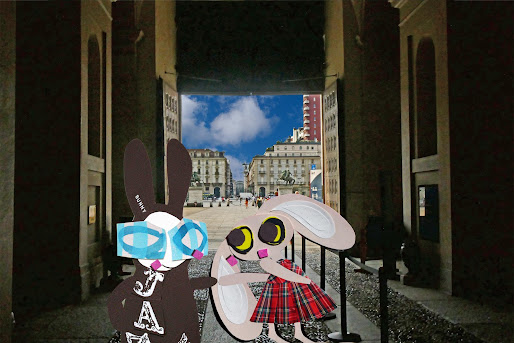 The Wabbit was taking a constitutional in the Royal Gardens. He'd just got to the entrance when Lapinette came loping up and blew kisses at him. The Wabbit shuffled his feet and looked all round. "Lapinette!" he exclaimed. "To what do I owe the honour?" Lapinette looked coy. "I've been thinking." Now the Wabbit was apprehensive. "Oh really," he said cheerfully, "what about?" Lapinette jumped up and down. "We need a holiday. I asked the Holiday Section of the Department for special leave - and they said yes." The Wabbit raised his eyes. "How long for?" "A fortnight," said Lapinette. Now the Wabbit knew one thing. There was always trouble on holiday and it always turned into an adventure. He mentally packed his automatic, a stock of C4, several stun grenades and a snazer rifle. "You can bring a nice book to read on the beach," said Lapinette. The Wabbit inwardly gritted all of his 28 teeth, but smiled nonetheless. "Habermas on the logic of the social sciences." Lapinette was appalled. "No, no, no, something light, like a detective book." The Wabbit thought for a bit. "OK. The Name of the Rose, by Umberto Eco?" Lapinette sighed. "Phew. I suppose so." They hopped together through the archway and down to the gardens. "Doesn't it feel good to have no missions?" asked Lapinette. The Wabbit hated not having a mission - but he grinned. "Of course." Lapinette went on. "No Agents of Rabit, no prehistoric creatures, no monsters." The Wabbit paused for effect then pulled two tickets from under his fur. "Special deal on the train. Prosecco on tap and salad sandwiches galore. Quantum will take us." Lapinette slapped her paw on her head. "He's a bit stuffy." The Wabbit grinned again. "Let the train take the strain!"
at February 16, 2022