4. The Wabbit and the Particle Accelerator 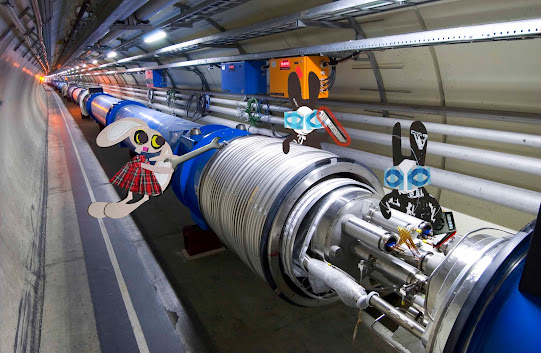 The remote control took the Wabbit into the tunnel. Somewhat to his surprise, Lovely Lapinette and Wabsworth were there and were working hard on the particle accelerator. The Wabbit waved his remote control. "This any good to you?" Lapinette looked up. "What took you so long? The Department paged you ages ago." Wabsworth scowled and shook his fist. "Old fashioned devices. This is long past its sell-by date." The Wabbit studied it for a while. "How do you know when it's working?" Lapinette responded. "It makes a sound." The Wabbit was mystified because he knew that particles colliding didn't make much of a racket. Wabsworth snorted. "It has a sonification routine. It will make diddley diddley other-worldly sounds." The Wabbit lifted his remote control. "This doesn't make much noise either." He pressed the red button. It pulsed a deep crimson. Strange other-worldly music began. Lapinette found it quite hideous. "Who made this music? The BBC radiophonics workshop?" But according to Wabsworth's test meter, particles were indeed accelerating and crashing around. "The remote control wanted to come here," shrugged the Wabbit. "After all that work!" shouted Wabsworth. The Wabbit stood back. "You need to work on that anger sub-routine, Commander Wabsworth." Wabsworth smiled and laid down his test meter. "Our work is done. Let's go home." The Wabbit looked down the tunnel. "Don't they have one of these little electric buses?" Lapinette was sarcastic. "Shall I phone one?" But the remote control twitched and tugged and made its way down the tunnel with everyone in tow. The Wabbit smirked. "In the quantum world, you don't have to wait." "Or maybe you do," said Lapinette.
[Background image: CERN]
at February 07, 2022