7. The Wabbit and the Spiralling Tunnel 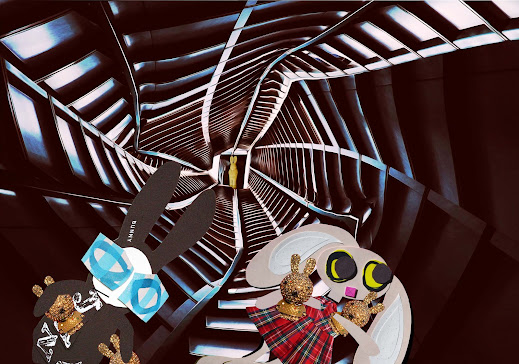 The Wabbit and Lapinette took the bejeweled rabbits and tried to get out from the tunnel, but nothing was the right way.  Corridors gave way to more corridors. Stairs twisted and spiralled along, upward then down. Going was tough but they knew they had to go up. The Wabbit perched on a step that was a sharp as a razor. Lapinette fared better and floated over the top like magic. "These rabbits are heavy," huffed the Wabbit. "Not at all," smiled Lapinette. They continued on their way. The Wabbit decided to take the stairs two at a time but fell and grazed a knee. "Slow and steady wins the race," commented Lapinette. She glided onwards. "Grrr," replied the Wabbit. Lapinette's ears swivelled. "Can you feel someone watching us?" The Wabbit clung on with one paw and risked looking back. "It's him." Lapinette kept looking forward, but her ears were tuning in. "The mystery chocolate figure?" The Wabbit screwed up his eyes. It was hard to see in the tunnel. "I think he's applauding." Lapinette snorted. "Maybe he could lend a helping paw." The Wabbit snorted too. "I don't think he's of the helping paw persuasion." He looked back again. The chocolate figure walked towards them but never seemed to get any closer. "Probably he'll be along in a jiffy," said the Wabbit. "A hundredth of a second?" smiled Lapinette. "I was being ironic," said the Wabbit. "That's not irony, that's sarcasm," grinned Lapinette. "He's hardly gaining," observed the Wabbit, "so let's ignore him." Lapinette bounded forward, "I can see a way out." The rabbits started to chant. "Way out, outa sight. Way out." The Wabbit groaned. "Can you dig it?"
[Background. Pretty Sleepy Pixabay]
at March 02, 2022