6. The Wabbit and Spyders v Mosquitoes 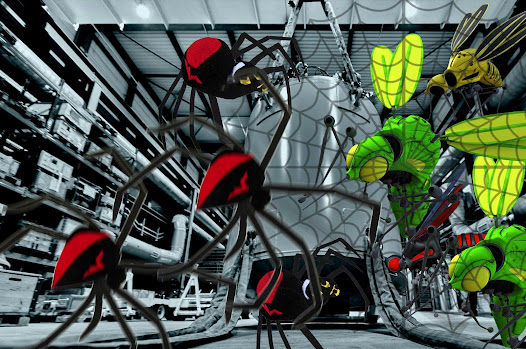 The Wabbit called in another favour from Marshall Duetta Spyder. The favours were mounting up, but the Wabbit figured Duetta would like this mission. Lapinette had been right and there were more than one android mosquitoes - a whole swarm in fact. They were good androids, but they had never dealt with Major Duetta. With two of her cohorts Duetta descended on the engineering lab where the android insects had located and advanced with menace. Two spyders spun a web of liquid titanium and threw it over the mosquitoes. They squealed and squealed but were outclassed, tangled as they were in the web. Major Duetta Spyder stood to the side and shouted. "Give up, androids. We don't like your kind round here." The buzzing noise was deafening. "You will be dismembered," shouted Duetta, "and your parts used for doobley drones." The spyders began to dismantle the drones, pinching legs off here and there. Duetta lifted her radio and sent a message to the Wabbit. "Mosquitoes defeated. Dismantling now." In turn, the Wabbit sent a message to CERN saying more or less the same thing. Then he added another. "You owe us a gala dinner." Lapinette turned to the Wabbit. "Duetta and her spyders give me the creeps." Wabsworth chipped in. "But less creepy than android mosquitoes." Lapinette nodded. The sound of munching came across the radio. "Do spyders like electronics?" The Wabbit laughed. "They like anything."
[ Background Image: Julien Marius. CERN. Mosquitoes. Sergei Tokmakov, Pixabay]
at February 11, 2022