3. The Wabbit and the Big Collider 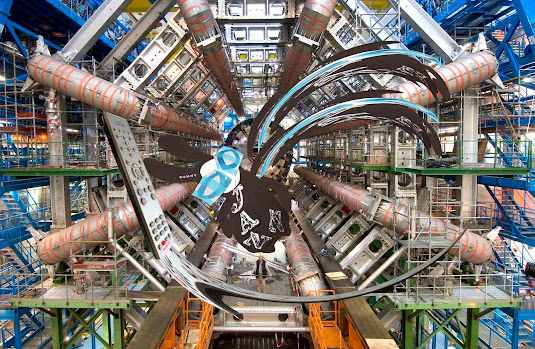 The Wabbit knew about CERN of course - although the Department was sceptical about its general approach and the Wabbit agreed with the sentiment. Nonetheless, this was a collider and the Wabbit was caught up right in the middle. He noticed the remote-control whirling in the distance, but he couldn't reach it. A member of staff looked up and the Wabbit called down to him. "How do I get home?" But the man shook his head and mouthed something back. The Wabbit tried to read his lips and it looked something like, "Would you care for a spot of lunch?" "I'd like a salad sandwich," shouted the Wabbit in reply. As it transpired, the staff member was calling "Get out at once," but the Wabbit wasn't to know. He kept revolving. "That remote-control is a menace," he said to himself. He was a long way up and didn't fancy dropping. He grabbed for it again, but unfortunately pressed the red button. "What next?" muttered the Wabbit. Nothing appeared to happen - but the custodian fellow vanished along with a great deal of machinery. The scene faded and the Wabbit was in a deep tunnel. He thought he could see Lovely Lapinette in the distance. "Lapinette!" he yelled. There was no reply. He willed himself forward. He could see her waving. "Lapinette!" he called again. He waved back vigorously and by accident caught the remote-control. It headed into the tunnel and dragged the Wabbit along. "This is better than being zapped," sighed the the Wabbit. "Anything to stop you pushing my buttons," said the remote-control.