5. The Wabbit and the Android Mosquito 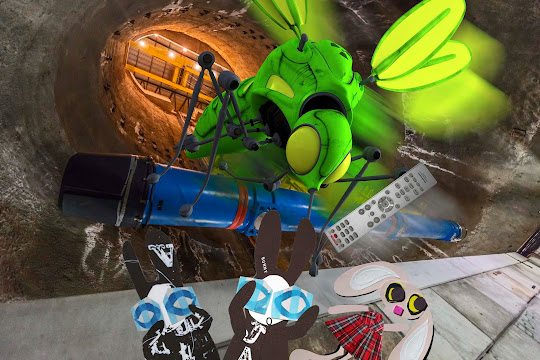 The remote pulled them to the end of the tunnel but a shock lay in store.  A giant android mosquito sat on new bit of accelerator, and it looked very menacing indeed. The Wabbit did what he usually did. He shouted "Run!" and nobody argued. The mosquito lurched forward. Its stinger dripped venom that melted components and destroyed the fabric of the pipe. Wabsworth turned and - being an android - he tried to communicate with it. But the mosquito just screamed in an unintelligible high-pitched whine and jabbed at the Wabbit. "Gerrof," yelled the Wabbit. He caught the edge of the acid spray and it stung like amber asp. "Yikes," he yelled. Lapinette wanted to turn the tables, but she couldn't think how. "Go away you big green thing!" This had no effect. Wabsworth tried again with an algorithm he'd just invented. It was composed of an electronic version of flowery perfume mixed with garlic and onions. The mosquito stopped. Then it tried to fly. Its wings moved up and down, but nothing happened. Wabsworth yelled with glee. "It's modelled on a real mosquito. They hate some smells and they're terrible at flying." They all stopped running and turned. For a moment the mosquito stared at them. Its eyes swivelled. Then it seemed to spit, gave a short buzz, and lurched off. "This is what's been interfering with the accelerator," said Lapinette. "We've stopped it for now," said Wabsworth. "But it will certainly be back," said the Wabbit. "And what if there's more?" said Lapinette. "I don't suppose a net would be any good," pondered the Wabbit. Wabsworth laughed. "Maybe it would."