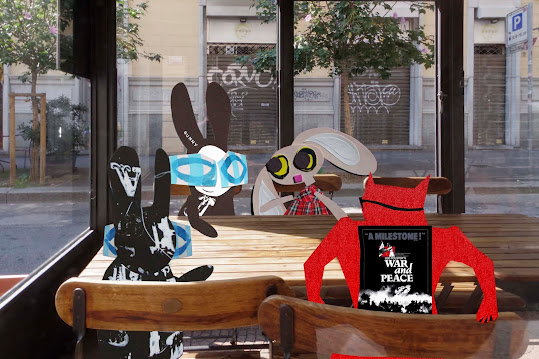 Far from Rome, at a Caffè in Sal Salvario, the team gathered to discuss the recent adventure. Skratch the Cat was late as usual. As he scrabbled his way onto the remaining seat, the Wabbit asked him the question, "What was that for a sort of Adventure we just had?" Skratch meaowed a massive meow. "It resembles others I've seen - but with one distinguishing feature." They waited with baited breath. "It had an anti-war vibe right in the middle. In that respect it is an anti-war story." Wabsworth grinned and rapped the table. "There's no such thing as an anti-war story in my opinion." Lapinette was sceptical. "You are misquoting Truffaut. He said that to show something was to ennoble it." Wabsworth shrugged as if he'd proved his point. The Wabbit decided to contribute. "So the officer's noble grunt was just another way of ennobling war?" Skratch held up a paw. "War can be represented as spectacle, the eerie display of soldiers up to their waist in snow and the determination of the soldiers to advance. That is ennobling too." Lapinette demanded attention. "No one asked about the stripped-down buildings that provided our rather inhospitable destination." Wabsworth's memory banks whirred. "Guy Debord would have appreciated it." "Ah yes," said the Wabbit, "The Situationists may have recognised industrial set design." Skratch smiled and meaowed, "Paulo Ventura might have said something about that too." "Since he designed it," laughed Lapinette. "He designed it," said the Wabbit, "but he's never actually been there!" "I didn't see a bar there," said Wabsworth. "More's the pity," laughed the Wabbit. "We would have stayed longer."
at January 15, 2021