4. The Wabbit and Lapinette meet Traffic 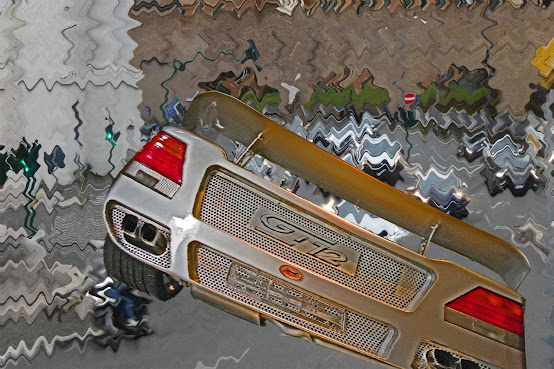 Lapinette shifted the lever sideways and the car went likewise. But then with enormous speed it burst into the traffic. It continued to slew sideways and they watched as everything passed. Things were fractured. They just missed a motorbike as the traffic went every which way. Lapinette tried to bring the lever back but it wouldn't budge. The Wabbit gritted his teeth. "Exciting," he murmured. Lapinette muttered something rude about the controls. With enormous effort she shifted the lever and it swung back to dead centre. They seemed to be at a standstill but the traffic came forward towards them and they moved with it. Lapinette wrestled the controls and managed to move it sideways but in the other direction. The car swung round and lifted a bit. The traffic was still fractured. "It's the first run," observed the Wabbit. "I thought you said the car travelled in time," said Lapinette. The Wabbit nodded at the traffic. It was going backwards now and they followed it. But the traffic diverged and the car came to a standstill. "It's looking for instructions," said the Wabbit. "I'll  give it binky instructions," growled Lapinette and she threw the lever forward. This time it engaged. Now the traffic seemed to be streamlined, and filaments attached to every vehicle. The car started to turn on its axis. The cockpit was so small that the Wabbit and Lapinette stayed more or less where they were - but they turned with the car. "Interesting," said the Wabbit. "Very," said Lapinette through gritted teeth. The car continued to turn until the traffic blurred into a single colour. They made their way backwards through the colour, then  left the colour behind. "Where are we now?" asked Lapinette. "The Other Side?" replied the Wabbit.
at January 04, 2021