8. The Wabbit and Sideways Home 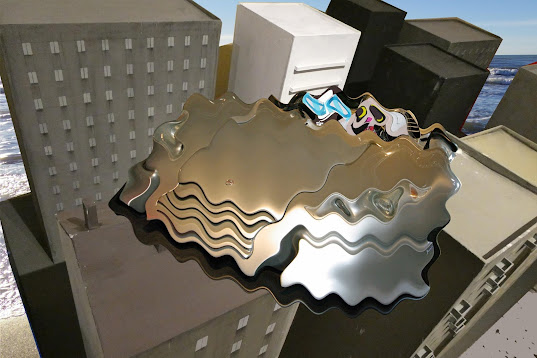 Lapinette got into the car, slammed the door and switched on the heater. "Brrr," she said, "Let's go home." The Wabbit was cold too. He turned the heater up to maximum. Lapinette looked at the adapted gear lever. "Which way?" The Wabbit didn't have a clue but he suggested the other way from before. "Opposite direction, sideways," he said. Lapinette crashed the lever over. The car shimmered and shook. Then it warped in a lateral direction. The felt the pressure. Then it was gone and they sailed over the rooftops. The Wabbit looked down. Colours changed, but the sea continued to crash silently on a long- forgotten beach. "What was that place?" asked Lapinette. The Wabbit pondered while he gazed and then he said, "It's not a place, it's a different space. We inhabited it for a while. Now it's gone." Lapinette sat in the driver's seat but there was nothing to do but wait for the car to make its journey home. "It's a relaxing drive," she said, "but I'm looking forward to an aperitivo in a proper city." "Why don't we have one here and another when we get there," smiled the Wabbit. He fished a hip flask from his fur and handed in to Lapinette. "I come prepared," he grinned. Lapinette lifted the flask to her lips and took a hearty swallow. "Chilled Aperol Spritz," she murmured, "my favourite. What time do we get back?" "Same as when we left according to Dr Strangeglove," replied the Wabbit. They progressed through various colours. Suddenly the scene cleared. They were staring at the Rome traffic - and before long they were parked outside the Pasticceria Siciliana Svizzera. "Happy Birthday!" said the Wabbit.
at January 13, 2021