3. Wabsworth and the Secrets of the Box 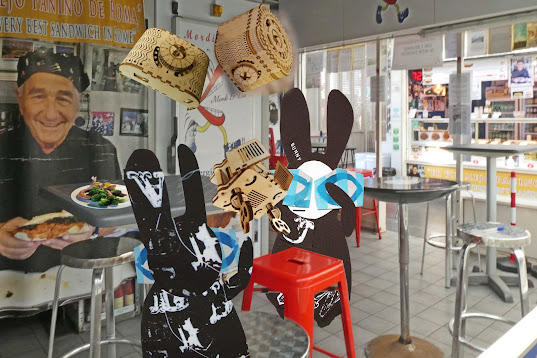 The Wabbit met Wabsworth in a Caffè which purported to have the best sandwiches around - and there, the Wabbit presented his find to Wabsworth. He handed it over with a smile and Wabsworth examined it top to bottom. But it was as he got to the bottom that the box slid from his grasp. The Wabbit was surprised because Wabsworth was an android and had never let anything slip from his grasp. The box jumped in the air, landed on a table and bounced upwards, breaking into segments. The segments hovered in the air, moving round and round until the Wabbit was dizzy. Wabsworth watched carefully. One segment formed an inner compartment and two floating keys locked into place. "Gotcha," said Wabsworth. He grasped both keys at the same time and twisted them - one way then the other. The segments stopped spiralling and became still. The box began to open. The Wabbit squinted at what appeared to be an empty space. "There's nothing in it!" he exclaimed. "Don't be so sure," said Wabsworth, "Nothing about this box is normal." The Wabbit jumped up and down. He desperately wanted it to be a great discovery. But he could smell fish and chips. "Are you thinking about food?" he asked. "Yes, fish and chips," said Wabsworth. "So maybe the box will reflect what we think about," murmured the Wabbit. He thought about sausage and broccoli and suddenly it was there on the table. Wabsworth turned the keys back, grabbed all the bits and reassembled them. "It could be dangerous," he said. "Think and eat?" said the Wabbit.
at January 22, 2021