5. The Wabbit and the Dragonfly's Flight 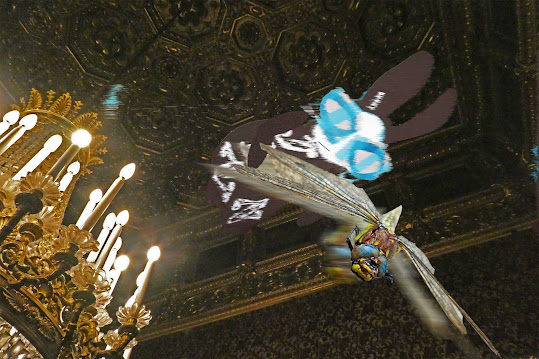 The Wabbit waited because he knew about insects. If they flew out of the window, everyone was happy. But then they'd fly in again. He waited. Nothing happened. He thought he'd get some height and he climbed on the chandelier. He kept a close eye on the window, and he heard it before he saw it. The flapping of gossamer wings heralded the arrival of the strange dragonfly. It flew in the window and up to the roof. That was what the Wabbit wanted. He launched himself from the chandelier and nearly grasped the dragonfly, but it was crafty. It twisted away and the Wabbit twisted after it. He got a wing then lost it. He tried again. He managed to get a hold on its body and together they crashed downwards. "Get back in the box!" he yelled. "Can't make me unless you ask me properly," shouted the dragonfly. They spiralled down together. The Wabbit tried to think of different ways of saying it. "Please get back in the box." No effect. "Return to the box." The Wabbit was desperate. The dragonfly shook its head. The floor loomed. "Box in go," tried the Wabbit. The dragonfly laughed. They hit the floor and rolled and rolled. The Wabbit kept his grip. "Obey my command, get in the box." The dragonfly lost all its spirit. It dragged itself to the box and crawled inside. The box snapped shut. The Wabbit sighed with relief. He could hear a faint voice from inside. "You haven't heard the last of this, wascally Wabbit." The Wabbit grinned the weakest of grins and he made sure the box was fastened down. "You have to think outside the box."