2. The Wabbit and the Magic Box 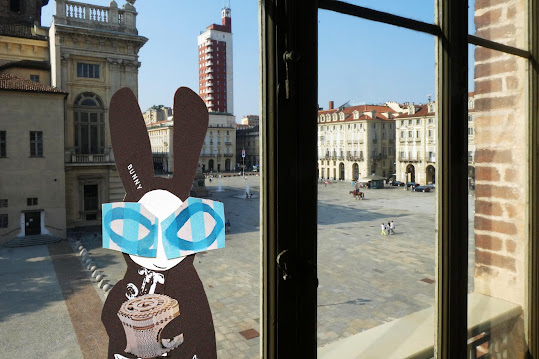 The Wabbit paused on the way out because he couldn't resist a closer look at the box. He needed better light, so he hopped up on a ledge by a window and pulled it from his fur. It was a strange looking affair - roughly square but not quite. And there was a device on the front that looked like a knob. The Wabbit fiddled with it. Nothing happened.  He turned it upside down and shook it - but to little effect. The knob clicked round and round - but didn't open the box. He looked closer. There were numbers etched on the side. "A combination lock," hissed the Wabbit. He was secretly thrilled with his find. A box was one thing but a box he couldn't open was another. He made a few attempts starting with 000. To the Wabbit's knowledge, all combination locks had a row of zeros as a default. There was no result. The Wabbit tapped the box and then gave it a good whack. Nothing. "This needs an expert," he thought. For a moment he tried to think who that expert might be but there was only one - Wabsworth. Since Wabsworth was an android, he reasoned, finding the combination would be a piece of cake. For a moment he could smell a sweet cake which he particularly liked. "Panettone," he murmured. Then the smell was gone. "Curious," he thought, "but I'd rather have Rum Baba." For just a second the smell of Rum Baba wafted through the air. In fact, he could almost taste it. "This needs looking into," he said to himself. The smell hung in the air and then vanished. His stomach rumbled and he tried to drag the top from the box. It resisted all efforts to open. "Grrr," he said, "I don't employ an android for nothing." Then he vanished in search of Wabsworth.
at January 20, 2021