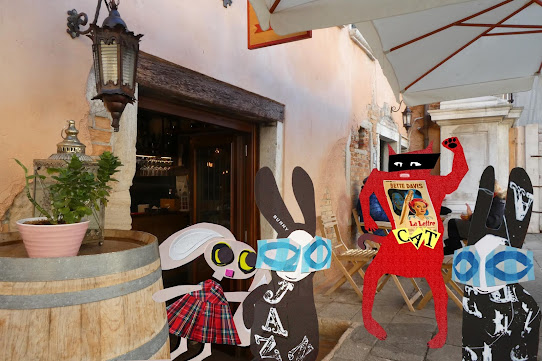 The Wabbit said he'd give everyone a surprise and took them to a Caffè he knew in Venice. It was very dry this year and they didn't have to wear Wellington boots - so Skratch was very pleased because he hated getting his feet wet. Lapinette and the Wabbit went ahead to order the drinks, because that was the way things worked. "Over there by the canal," said the Wabbit, "our drinks will be here in due course." Skratch was anxious to answer the question about the goings on with the letters and Wabsworth posed the question. "What on earth was that that for a sort of adventure?" Skratch was duty bound to respond. "It began as a satire about words and their meanings, but quickly changed to a discourse on the structure of words themselves." The Wabbit was disappointed. "Is that it?" Skratch meaowed a long and plaintive meow, "Certainly not. The discourse circulated around the power of the dictionary and, in essence, demonstrated that the letters had little power at all." Wabsworth grinned his android grin. "All the letters were caught in the dictionary's control of the word."  Skratch was on home territory. "And a word only has meaning as a place in a signifying chain." Lapinette laughed. "Stuck in a concatenation?" "At the station!" added the Wabbit. The rest all looked at him and groaned. "In other words it hardly mattered," said Wabsworth, "the lower cases and the upper cases are at the mercy of sound-images." The Wabbit wanted the last word. "They say the unconscious is structured like a language," Lapinette did get the last word. "Desire is therefore always left unsatisfied." "I desire my drink," said the Wabbit. Then they laughed and laughed and laughed.
at December 26, 2020