6. The Wabbit and Dictionary House 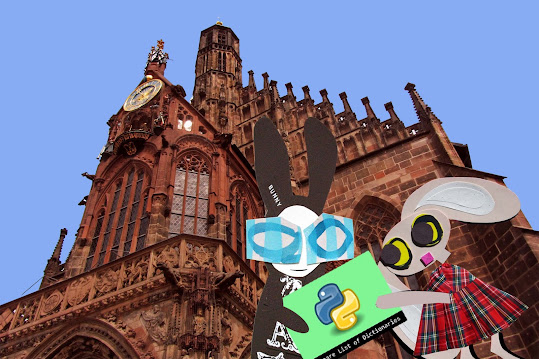 The Wabbit and Lapinette carried out painstaking research but found nothing. So they took with them a python list of dictionaries and went to Dictionary House. The House lay deep in the Bavarian Quarter, a little-known part of Turin. The python list was a way of finding things out but that was a far as the Wabbit could go. It was a collection of unordered values accessed by keys. They keys had to be hashable, floating point numbers, strings and tuples. When the Wabbit got to tuples he bowed out. Of course, Wabsworth would have known all about it - but the Wabbit was determined to sort the matter out himself. "You don't need that," said Lapinette. The Wabbit asked why not. "Because," replied Lapinette, "the answer isn't there." The Wabbit nodded gravely. "Of course," he said. He waited but Lapinette said nothing. "OK where is the answer?" said the Wabbit. "The answer is in common usage," said Lapinette. It was the Wabbit's turn to say nothing. He nodded as if he understood everything. "Many languages do not have capitals at all," said Lapinette. The Wabbit waited. "Arabic, Hebrew, Korean or Japanese" (The Wabbit understood all that.) "The matter is quite complex," continued Lapinette, "but the lower-case letters appear to be demanding an end to mixed text." The Wabbit shook his head. "I don't think anyone will agree to that, but I have an idea." Lapinette shrugged. "Everything will be in upper case but very small," said the Wabbit. "I've seen it done," said Lapinette, "but I don't think the Upper Cases will agree." The Wabbit thought for a while. "What about Studly Caps mixed case?" Lapinette snickered. "Like the hidden message in HoTMaiL? They might just go for it ... let's go inside and ask."
[HoTMaiL: HTML]
at December 14, 2020