4. The Wabbit and the Lower Cases 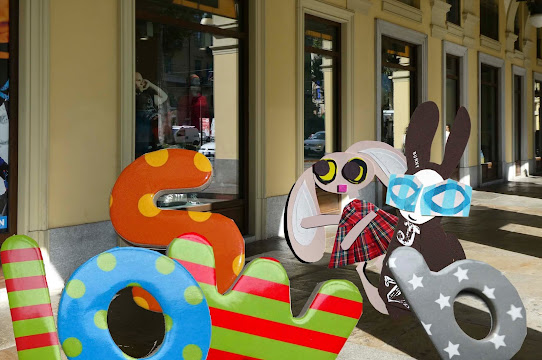 The Wabbit and Lapinette strolled over to meet the lower cases and they were grumbling. The letter s addressed Lapinette directly. "What are the Capitals doing now?" It was the Wabbit who replied. "Capital A is coming to beat you up, but he's going to be some time." The other letters were waiting to cross the road and they all turned round. "We've had enough of being oppressed by the Capitals. We have the weight of numbers. We will defeat them." The letter b tapped the Wabbit on the leg. "I'm b," he said. "Pleased to meet you," said the Wabbit, "what would you like to be when you grow up?" The small letters were mortally offended. "We are all grown up and perfectly capable of making our way in the world!" Lapinette tried to smooth things over. "We only meant you were small." The letters talked amongst themselves then pushed the letter w forward. "Will you help us to draw up a list of our demands?" The Wabbit dug in his fur and took out a small notebook and a pen. "Please write it all in lower case," said the o. The Wabbit nodded gravely. "Firstly," said the w, "capitals are henceforth to come at the end of sentences." The rest piped up. "And all people names shall end in a capital and not begin it." They gathered to discuss it further. Then the s turned round. "All place names shall have no capitals at all." The Wabbit noted down all the points, then read them aloud. There was a murmur of agreement. But Lapinette had an important question. "To whom shall we take these proposals?" The Wabbit made a suggestion. "The dictionary people?" The letters went into a huddle and came up with a question. "Do dictionary people agree on things?" The Wabbit went into a huddle with himself and then came up with an answer. "Mostly," he said.
at December 09, 2020