3. The Wabbit and the Indefinite Article 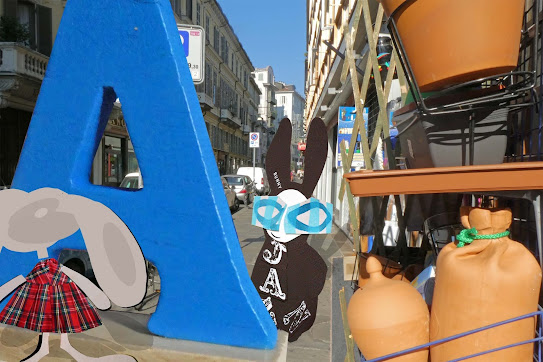 The Wabbit thought no more about it. But he was making his way along Via Andrea Doria when he came across an obstacle. There was Lapinette and she was staring at a giant Letter A, which was obstructing the sidewalk. "Get out of the way," she shouted and she waved her arms. "I will not," said the Latter A. "I'm getting up and standing up for my rights." Lapinette hopped from one leg to another. "Do it somewhere else!" The Wabbit watched for a little while and then he popped his head around the letter. "Hello Lapinette." Lapinette smiled and waved a greeting. "I'm trying to persuade this letter that he should locate elsewhere." The letter twitched a little. "I'm the indefinite article and I'm not necessarily a he." Lapinette placed her arms at her side and said in no uncertain terms. "I don't care. The sidewalk is for pedestrians." The Wabbit decided to get involved. "We've been getting trouble from your kind," he said. "My kind?" said the Letter, "Do you mean these other non-standard letters?" The Wabbit was lost for words. "Perhaps you're referring to the lower cases?" Now the Letter moved up and down. "We've had enough of these lower case varmints, always around our feet. We're tired of them!" The Wabbit shook his head. "Couldn't you conduct your struggle in a library or maybe even the Internet?" "No" cried the Letter A, "Were taking to the streets and soon we'll take up arms! Death to the lower cases! We shall not rest until we rid the world of them all." Lapinette was appalled. "That's not very inclusive." The Wabbit agreed. But the Letter A stood his ground. "I see some lower cases over there, I'm going to get them!" He tried to move but couldn't go fast. "Would you like a push?" smirked the Wabbit.
at December 08, 2020