2. The Wabbit and Strangeglove's Machine 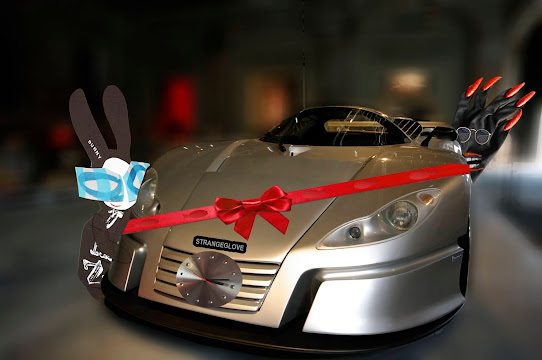 Doctor Strangeglove called the Wabbit to see what he'd done. He'd been working in the Wabbit's shed to build a surprise present for Lapinette's birthday and the Wabbit was on tenterhooks to see it. The Wabbit was surprised. "That's Wab!" he yelled. "Oh Wabbit, I found it under some covers in a corner and adapted it. I hoped you wouldn't mind." The Wabbit was a bit embarrassed. He'd borrowed it in 2011 for a race and quite forgot to give it back. He thought about it for a bit and decided if they hadn't asked for it back, they didn't really want it. "That's OK," he said, "We've improved it." Strangeglove smiled. "We certainly have. Under the bonnet is an anti matter unit of my own design." The Wabbit patted what passed for a bumper. "What about controls?" Strangeglove nodded his gloved head. "There are three main controls. Forward to the Future, Backward to the Past - and Sideways." The Wabbit was intrigued. "Where does Sideways go?" "I don't really know!" shrugged Strangeglove, "so better not touch it." The Wabbit looked alarmed but said nothing more about it. "It has inhospitable climate control," said Strangeglove and I also put in a make-up case and a fur drier." "Very wise," nodded the Wabbit. Then he noticed the bow. "That's a nice bow, I thought you didn't do bows." Strangeglove looked embarrassed. "I found that lying around too. I stuck it on, and it wouldn't come off." The Wabbit knew where it came from. It had been attached to a present given to him by Lapinette. "I suppose bows all look the same," he chuckled. He rubbed his paws together. "Now I have to find a way of getting Lapinette round here." Strangeglove laughed and laughed. "Just tell her it's surprise," he said. "She'll be suspicious," replied the Wabbit. Strangeglove drew himself up to his full height. "Send a red rose by courier pigeon." "That'll work," agreed the Wabbit.
at December 30, 2020