7. The Wabbit inside the Word Drum 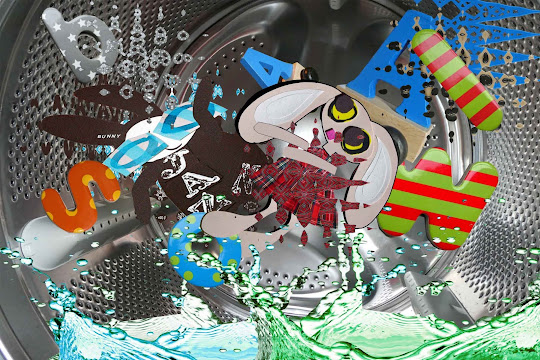 As they walked into the vast halls of Dictionary House, a door slammed behind them and things started to revolve. The gothic interior gave way to the clean lines of a washing machine and it started to fill. One by one, all the letters they'd met joined them and started to gyrate. Everything ran and colours shattered, merged and separated again. Lapinette's kilt turned into coloured arrows and swept across her face. Only the Wabbit seemed happy. He'd been twirled before, so he lay back and let the wash do its work. Capital A got very small then big again then small. The lower-case letters swam  in the exotic brew. Now they were bigger than the capitals and they seemed happy too. "What's happening?" yelled the A. "You're being decapitalised," laughed the Wabbit. The wash got more violent and everything swirled around. All of a sudden it stopped. Then it began to twirl the other way. The letters became the same size. "Give me back my kilt!" shouted Lapinette. The tartan became tartan again. Lapinette breathed a sigh of relief. Now that they were the same size, the lower-case letters smiled benevolently on Capital A. "Join us brother," they yelled, "Join us in the heady brew of language." The Capital A shrugged. "I may as well," he said. "I was getting tired of always being at the front. Perhaps I could be in the middle." Small b smiled. "Perhaps you could be at the back," he said. "That's OK," said A, "I've been rather stressed always beginning sentences." The Wabbit dried his fur by blowing on it. "Now that your all palsy-walsy, perhaps we could get out of this drum." The door swung open. The gothic halls beckoned. "So many letters, so little time," said Lapinette. "Always time for a drink," said the Wabbit. "How do you spell that," laughed Lapinette.
at December 24, 2020