2. Skratch and the Way of Words 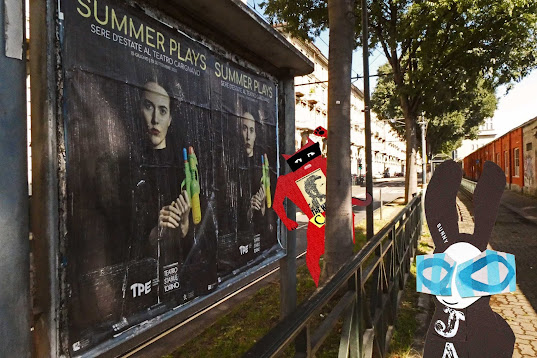 The Wabbit made his way along Via Nizza in search of Skratch when he hear a meowing behind him. He pretended not to hear and instead spoke to the poster. "I was wondering poster, why you refer to the summer? Although this is a bright day, it's Winter and yet you proclaim a different season." Skratch was beside himself. "Wabbit, Wabbit! It's me Skratch and I know all about words." The Wabbit slowly turned. "Oh it's you, Skratch. I thought that poster was speaking." Skratch climbed down from the tree. "As time passes, Wabbit, the poster becomes a sign of something else. Something long past and hard to remember." The Wabbit nodded. "True. Summer is indeed long past and very hard to remember." Skratch paused and licked his paws. "You were looking for me Wabbit?" "I was because I wanted to ask you about words," said the Wabbit, "I wondered if words could fight amongst themselves." Skratch grew interested. "What might they fight about?" The Wabbit grew pensive and replied. "Their meanings." Skratch launched into explanation. "Words have arbitrary and culturally prescribed meanings and we could assign meanings to words as we went along. As long as we agreed on the meanings all would be well." The Wabbit looked round as if someone might hear him. "Supposing the words didn't like their meanings. Supposing there was conflict." Skratch was becoming interested. "You mean if words were self-serving entities with a conscious point of view?" The Wabbit nodded his agreement. "Yes, supposing words didn't like the typeface they were set in - and supposing they went to war." Skratch laughed. "You do have a vivid imagination, Wabbit." The leaves on the sidewalk rustled in a breeze that sprung from nowhere. "Not at all," said the poster. "I should be set in Times New Roman." The Wabbit spoke sharply. "I told you there'd be trouble."
at December 04, 2020