5. The Wabbit and the Rumble Letters 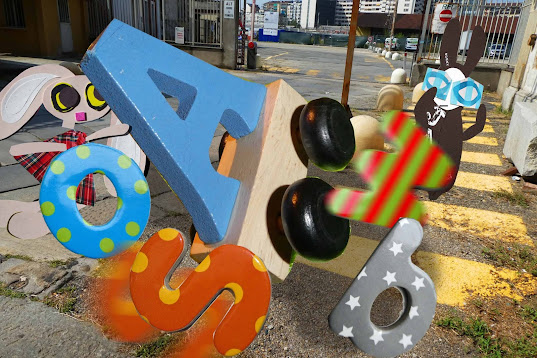 The Wabbit and Lapinette chatted amiably to the letters and told them they would make a case for their demands. But as they passed along Via Nizza Capital A sprang out at them. He's acquired some wheels and so he'd made good speed down the redundant cycle lanes that had sprung up. He kicked the w to the side. "Oh you big bully!" yelled Lapinette. She tried pushing him but he wouldn't desist. He swept the o to the side and laid into the letter s with venom. The letter s was having none of it and he clattered the Capital A with a left jab. "You little fool, your no better than a snake," shouted Capital A. He tried to trip the s up, but only managed to stub his base on the sidewalk. The s bounced back. "Your tyranny ends here, you moron," he shouted. The s jabbed again and again. Ever watchful from the side, the letter b shouted in support. "Take that for your trouble," he screamed, "And that and that." Encouraged by Lapinette's push, the letter o came back fighting. He rolled over the Capital and ground his wheels until they were flat. The Wabbit hadn't got involved up until now. His role as peace maker seemed to be in danger so he strode into the midst. "Quieten down now, you letters." His voice as far from soothing, especially when the w accidentally hit him in the eye. The fight was becoming something more than a rumble but remained less than a donnybrook. So there was hope. Eventually the Wabbit and Lapinette managed to separate them. The Wabbit dabbed his eye. "You've have got to make an accommodation," he said, "Or you'll all be dead letters." Lapinette had her pad and pen at the ready. "I'll dash a note off to the dictionary people to see what they say." The Wabbit nodded. "Stay clear of four-letter words!"