6. The Wabbit in the Field of Gold 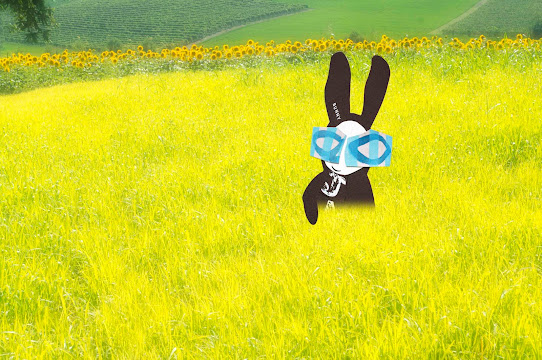 "Now you're talking!" said the Wabbit. The stark stairway had been replaced by a field of gold. And he could move, that was nice. He tried everything - starting with the tips of hs toes. Then the rest of his feet joined in. Soon everything was twitching, and he felt as happy as he'd ever felt. The sun was out. The marigolds were in bloom. Rolling countryside did what it did best - it rolled. The Wabbit ambled through the field, humming a merry tune. There was something not quite right about it, but the Wabbit decided to tolerate it for the time being. He ambled to the right, then ambled to the left. He ambled back and forward. Then he realised what it was. He wasn't getting anywhere. He could only amble. And the scene, admirable though it was, would not change. "I'm stuck in a loop," he murmured. He considered the matter and decided that no matter how nice it was, it should stop. "Stop the loop!" he shouted in the most commanding tone he could summon. But the loop continued to loop. "This is awfully nice, but please change!" The Wabbit's voice suggested he was at the end of his tether. "I've had enough, and I want to go back to ordinary non-Kafka adventures." A breeze sprung up. "Maybe this is it" thought the Wabbit, "Maybe everything will go back to normal." But the breeze got stronger. The marigolds began to lose their leaves and they flew in the air. Fields rolled past rather more than they should. "Here we go again," thought the Wabbit.
at July 29, 2020