10. The Wabbit and the Ghostly Phone 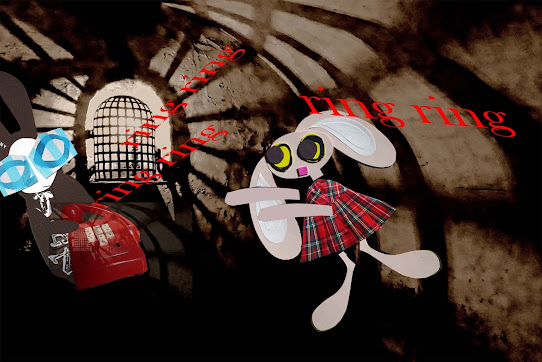 They followed the ringing and pushed a door open. It was an old wooden door and as it swung it let out a shrieking creak. But it wasn't enough to drown the shrill sound of the phone. They stared at it. The ringing got louder and louder and louder. The Wabbit raced over and got behind it. His paw stretched out but Lapinette yelled, "No!" She jumped for the phone but froze. So did the Wabbit. "I'm not sure you should touch it," said Lapinette. The Wabbit had no choice, his paw was frozen too, just above the handset. The phone rang and rang and the handset shook until it tilted off the plungers. The ringing stopped and a voice came out of the earpiece. "Help, help!" Whatever had gripped Lapinette let go. She hopped towards the phone and bent down. "Hello." Her voice was cautious. "Who's there?" asked the voice. "Lapinette," said Lapinette. "That's a funny name," said the phone, "Is there anyone else there?" The Wabbit kept his paws off the handset. "Just the Wabbit," he said. "No-one else?" asked the phone. The voice sounded disappointed. "Afraid not," shrugged the Wabbit. "I'm trapped in this castle," said the phone, "I've been here for years without a soul to talk to." The Wabbit smiled one of his smiles. "No calls then?" The handset rattled on its plungers. "Sometimes there's a call and I answer and there's heavy breathing." Lapinette sighed, "There's a lot of these phantom callers." The phone gave a little moan. "Can you get me out of here?" Lapinette looked at the Wabbit. "It's your call."
at July 01, 2020