13. The Wabbit and the Grisly Sausage 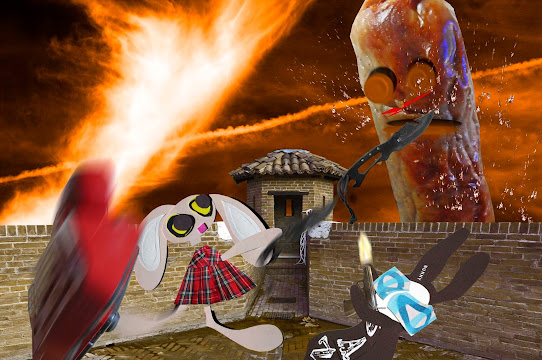 The Wabbit was too late. Up loomed the most horrid sausage he had ever seen. It towered above the ramparts and spat hot fat across the bricks. The sky turned orange as a paprika sausage on a spit. Lapinette wrinkled her nose at the smell of frying. It was putrid, rancid and acrid - and everything else she hated. She pulled an edged weapon from her frock, then braced herself against the wall and threw it. It barely grazed the sausage, but it let out a cry and snuffled. The Wabbit collapsed in the spray of fat, rummaging for his automatic. He unleashed a shot that caught the sausage square in the middle, but the sausage soaked it up like a sponge. The phone's attempt to get down and hide was unsuccessful, and the force of the spray knocked him high in the air. Lapinette mounted a second attack. If there was one thing the sausage didn't like it was slicing and it crackled and sizzled. She kept slashing at its skin and managed to force it back beyond the parapet. It paused, sizzling hard, before it lost grip and slid down the castle walls. Lapinette helped the Wabbit to his feet. "It's not finished," she gasped. The sausage was on his way back up the wall. They could hear its laboured spitting. Spray rose into the clouds. The Wabbit leaned over the walls. "I guess burning oil is out of the question?" Lapinette shook her head. "Pickling, curing, dehydrating?" suggested the Wabbit. He pondered. "Wind drying!" he said finally. "Where do we get the wind?" asked Lapinette. "Put your lips together and blow?" grinned the Wabbit.
at July 08, 2020