1. The Wabbit and the Blank Postcard 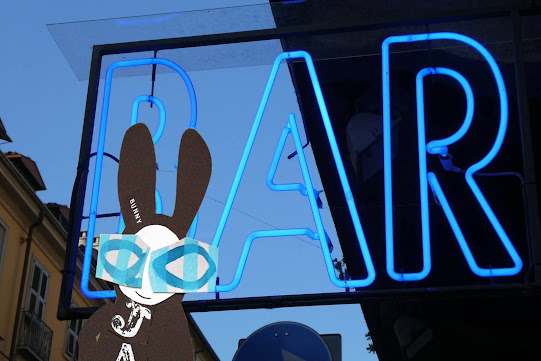 The Wabbit was perambulating along Giuseppe Mazzini and laughing to himself. It had been a long time since he had proper time off. Any holiday seemed like work so he preferred to be incognito and lay low. He thought of his last adventure and grinned. That was supposed to be a holiday but what a holiday it turned out to be. "I'm going to pretend I'm having an adventure and that will have the opposite effect." He imagined himself fighting off enemies, and the more he imagined the more playful they became. His head was full of Kabooms as he made his way towards Via Bodoni. Kaboom! That was the Ice Mice. Kaboom! The Euls met their match. His head was so full of Kabooms that it was getting sore. The Wabbit decided to think of more pleasant things. Lying on a beach at Fregene with Lovely Lapinette - now that was more like it. But after lying for a while he began to get bored. Perhaps a sea monster would come along? But the more he waited the less happened. So he concentrated on the road in front of him. The scene looked familiar. There was the usual statue in the Square. The corner bar looked the same. The students at the Giuseppe Verdi Music School went in and out, whistling the inevitable tune. Badly behaved children ran screaming to and fro. But all the same, something was different. He sniffed the air. The air was melancholy - almost as if something was going to happen. Then he caught it in the corner of his eye. It was merely a flash but it was out of place, like a stranded whale in a schoolyard. The Wabbit chuckled to himself and followed ..
at July 17, 2020