14. The Wabbit and the Enchanted Tumble 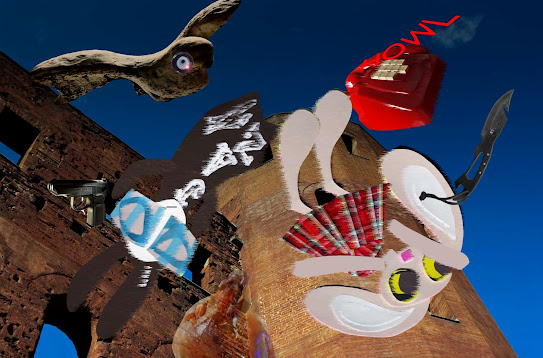 The Wabbit grabbed Lapinette - and with the phone under his arm jumped from the parapet. They fell as if in slow motion and everything changed. The sky changed, the castle fell to ruins and the Sizzling Sausage of Bondage sizzled his last. The telephone's handset came off the hook and it howled like a banshee. All this the Wabbit could see and hear, even if upside down and falling. He found himself staring into a single eye - the magic eye of the Black Dove. The Dove cooed. "Congratulations Commander Wabbit and Lapinette. The castle is no longer enchanted. You have saved the phone with all its data intact. Have a nice day." The Black Dove wheeled, circled and sped off into the sky. The Wabbit and Lapinette continued to fall but slower. The phone passed them on the way down. "I'm glad we hooked up," it trilled. They landed with a soft thump and dusted themselves down. "I can still smell sausage," said the Wabbit. "It had garlic in it," complained Lapinette. She picked up the phone and removed pieces of brickwork. "I have information for you," said the phone. The Wabbit grinned. "It'll keep until we get back to the ship." The forest was no more - barely a grove He could see the funnels of the Lepus where it lay afloat in a sea of sparkling blue. A gentle breeze sprang up. They all looked back but the castle was gone. Only a low brick wall remained. It lay amongst tufted reeds, with weeds growing from its masonry. But the Wabbit and Lapinette heard a dove cooing high up in the sky. They looked up and waved as it disappeared over the horizon.
at July 10, 2020