11. The Wabbit and the Talkative Phone 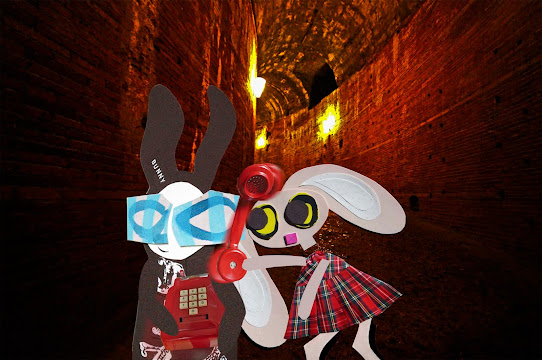 The Wabbit grabbed the phone and they sped down a dank corridor. Burning braziers set high on the walls cast a dim flickering light and made the air smoky. The phone vibrated constantly and wouldn't stop talking. "Where are we going? Do you know where we're going? What if it's the wrong way. What if there's no way out?" "Be quiet," yelled Lapinette. The phone stopped talking but it started to ring. "Dring dring, dring dring." The Wabbit could take no more. "If you don't stop, I'll hang you up." The phone fell silent. The Wabbit and Lapinette continued along the corridor for a long way. "I have no idea where we're going," whispered Lapinette. The Wabbit twitched his nose. "Can you smell cooking?" Lapinette shook her head. "No," she replied. "Maybe it's the braziers," suggested the Wabbit. He sniffed again. "Burned toast." Lapinette winced. "Maybe this is the Underworld." The Wabbit continued along the wall. "Then we'd better find our way up." The phone started ringing again and it spoke - this time in a low voice. "I can see stairs." Lapinette peered into the distance. "Over there." They made their way until they came to a staircase. It was in a bad state of repair and shrouded in a damp mist. Lapinette prodded the steps with a foot. Brickwork crumbled. The Wabbit looked at the telephone. "How did you get here anyway?" The phone vibrated. "I was kidnapped by a smooth operator. He spun me a line and I fell for it." Lapinette shook her head and pointed up the steps. "Was it a party line?"
at July 03, 2020