4. The Wabbit's Market Under the Stars 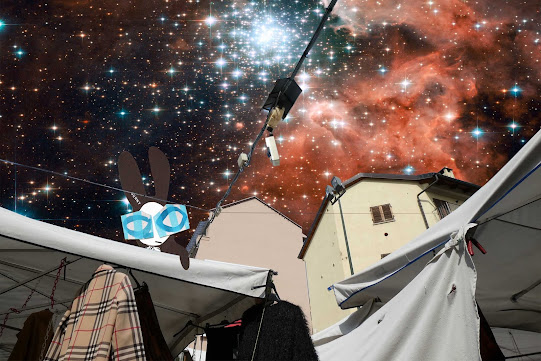 When the Wabbit looked down he could see a normal market with normal clothes. But when he looked up all he could see were stars. They weren't even normal stars. These stars were in the process of forming and far, far away from here. "But where's here," said the Wabbit to himself. No-one answered. The Wabbit hadn't the foggiest notion of where he was. It was all to do with the whoosh, of that he knew. But it wasn't much to go on when you were a normal rabbit with normal ears. "Maybe I'm not so normal," he said to himself. he grimaced. He'd had quite enough of being abnormal for one evening. He looked all round and had a think. "Maybe I could find something useful in this market." He looked down at the jacket and shook his head. "That doesn't look so terribly useful to me." Even if he had desperately wanted it, there was no one around to buy it from. He had a think. Where was there a market he never wanted anything from? The answer came in a flash. It was Crocetta Market and Crocetta Market was always filled with women's clothes. And the moment that flash occurred everything started to spiral again. "Here we go again," thought the Wabbit. Every stall in the street upended and shook itself out. There were dresses, bags, gloves, hats and tights and they all became gushing rivers that flowed down several streets in the direction of the Po River. The Wabbit hung onto his stand as it ripped away from its moorings. A wall was looming up and all he could do was stare as the wall began to change ..
[Sky picture credit: NASA]
at July 24, 2020