15. The Wabbit and the Sunset Sea 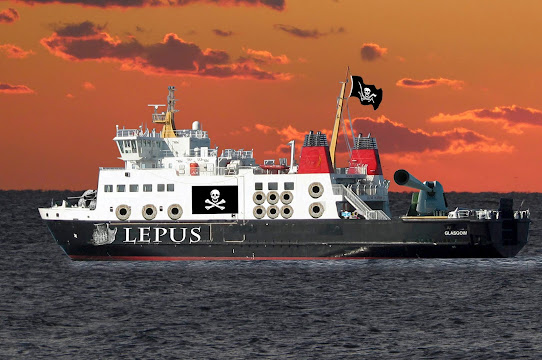 The Lepus set sail for home. The Wabbit and Lapinette stood by the rails and looked out on the ocean. The red phone was safely in the hold and whatever contents it held would be extracted by the Department. The Wabbit grinned. "That was an exciting voyage." Lapinette was glad to be in one piece. She glanced back at the island. "It's gone," she said. The Wabbit looked too. It was a clear enough evening, but of the island there was no sign. "It's not down on any map," he muttered. Lapinette snorted and drew out a chart from under her frock. "I made a map." The Wabbit began to giggle. "You're a legend in your own latitude!" Lapinette tried not to laugh. "What information is in that phone do you think?" The Wabbit pretended to ponder. "I think it's all the coordinates of the hideouts of the Agents of Rabit." The Lepus ploughed a steady path through the waves and they listened to the water churning under the hull. "Seems like a lot of trouble to go to," commented Lapinette. "Trouble is what we get into," smiled the Wabbit. "And out of," added Lapinette. They gazed at the sea for quite a while until Jenny sounded three blasts on the foghorn. They nodded to each other. "Fancy a drink?" suggested the Wabbit. "I fancy several drinks," replied Lapinette. The Wabbit proffered a paw and together they made their way to the Officer's mess.
at July 13, 2020