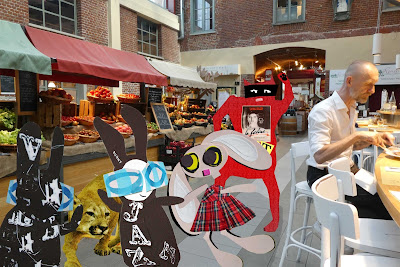 The Wabbit insisted on Eataly for the Adventure Caffè and they all arrived at more or less the same time. Lapinette was happy to see the Wabbit was in such a good mood - especially as someone had taken his favourite seat. She bounced in the air and yelled, "Where's Skratch?" They heard a long meaow as Skratch approached. "Here I am, fashionably late as usual." The Wabbit turned. "I can't ask you what kind of story that was, since it was your story." Skratch laughed. "Well as the storyteller, I should know!" Wabsworth shook his ears. "Some say that prequels and sequels signify the end of story telling itself" Lapinette giggled. "Then I await the end of story telling with optimism." Skratch brushed all this baiting aside with a wave of his paw. "It's the signification of after the end - and the beginning of the end of the start." The Wabbit looked to see if his seat was available. He shook his head. "Analeptic continuation," he murmured. "Gerard Genette," nodded Lapinette. "The backward continuation works its way upstream," agreed Skratch. "Everything does," smiled Wabsworth. His android circuits hummed merrily. Skratch wasn't so certain. "I reconfigured Puma's story through memory." "Maybe he should tell his own story," said Lapinette. "Maybe he should," growled Puma.
[Thanks to:  "The Promised End" of Cinema: Portraits of Cinematic Apocalypse in 21st Century Shakespearean Cinema. Carolyn Jess-Cooke]
at November 29, 2019