2. Skratch and the Captured Creatures 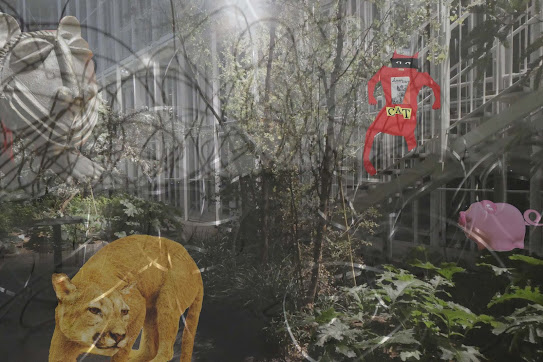 Skratch began to tell his tale and it was a strange one. "I heard the creatures were being held in a building as yet unopened. No one had ever seen them - but rumors flew like birds from a cage." The Wabbit settled back to be entertained. Skratch continued. "I watched the building, day and night without success. But one night a service lift dropped down and crates were shipped onto a van." Skratch meowed softly. "It was my chance. So I slipped in as they slipped out. The lift took me up to a high floor and I prowled onto a balcony." The Wabbit couldn't wait. "What was there?" Skratch took a deep breath. "It was quite a sight. There were plants and shrubs - it would have been nice except for the barbed wire." The Wabbit scowled. "Then it was a prison?" Skratch hissed. "It was and there were three creatures there - a puma, a tiger and a Chinese fighting pig." The Wabbit waited with baited breath. "They knew I was there," said Skratch, "but they made no sound. They didn't want to give me away. Then the puma spoke in a whisper. 'Are you here to liberate us?'" The Wabbit was agog. "How did you answer?" Skratch held up a paw. "I said nothing. I just dropped down and beckoned. Then they followed me up the stairs, into the lift and out." The Wabbit was impressed. He nodded his head with vigor and asked, "You avoided capture?" Skratch's teeth flashed. He grinned as only a cat can. "Those that saw us thought they'd had too much to drink - and probably they had. So together we made our way down Corso Inghilterra and beyond ..."
at November 20, 2019