1. The Wabbit and the Floating Beam 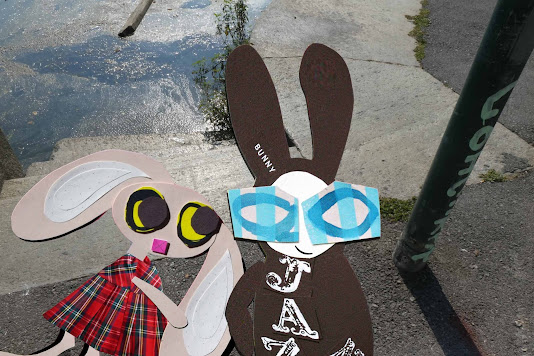 The Wabbit wandered along the riverside and then wandered back to the jetty. He was in deep contemplation, as was his way between missions. "Hello Wabbit! That ol' riverboat don't go nowhere no more." The Wabbit laughed. "Hello Lapinette. I know, I was just thinking about a swim." Lapinette giggled. She knew the likelihood of the Wabbit plunging into the Po was slim as a cigarette paper. "Water's looking a bit murky today," she observed. The Wabbit nodded because it was none too clean. "I was watching bits of debris floating past." He gestured at the river. ".. and to each piece I attached one of my problems." Lapinette nodded sagely and listened. "Then," said the Wabbit, "I watched them until they passed out of sight on their way to Venice." Lapinette raised an eye. "How long would they take to get there?" "It depends," grinned the Wabbit, "maybe a week." "So no problem," shrugged Lapinette. The water behind them swirled. Something clunked on the jetty steps. "It takes longer than that," said a voice. The Wabbit didn't look round but Lapinette did. "That floating beam spoke!" The Wabbit started to hop away. "Everyone's a critic," he sighed. But Lapinette persisted. "Are you flotsam or jetsam?" The beam bobbed up and down on the eddies, displacing tiny bubbles. "Neither. I am my own wood." The Wabbit grunted and turned to look. The beam floated out midstream and called. "Do you have a problem?" The Wabbit winked and grinned. The beam returned inshore. The Wabbit leaned down and hissed, "Problem is my middle name..."
at November 05, 2019