3. The Wabbit, Lapinette and the Fence 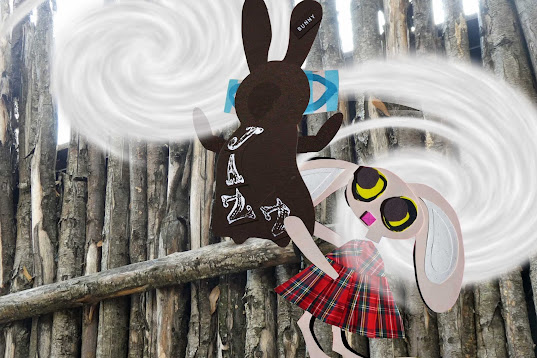 The banister in the Cinema had got on their nerves. So when the Wabbit and Lapinette found themselves facing a high wooden fence across the street they were furious. "Where'd this come from?" said the Wabbit. "Beats me," replied Lapinette. They looked around. There was nothing whatsoever left - except the fence. They traced along it - but it didn't seem to end. "I think this was where we started," said Lapinette. She thought for a bit. "I tell you what. You go one way and I'll go the other." They both set off - and within a minute they both met. Then they tried the other way but within a short space of time they were face to face. "A Mobius fence?" shrugged Lapinette. The Wabbit had heard worse explanations. "I'll climb up and see,"  he said. Lapinette punted him up and he was nearly at the top when clouds of gas swirled over the fence. "I can't see a thing," grunted the Wabbit. The gas clung onto Lapinette's frock. She tried to brush it away. "Yuk, it's sticky!" The vapour was cloying but she summoned energy and gave the Wabbit an extra punt up. He flew over the top of the fence. A moment elapsed before she heard him drop to the other side. "I'll try walking along it on this side," shouted the Wabbit. Lapinette listened to his paw steps fade. Then they got closer. Suddenly his face peered directly through the gas. "It only has one side," he sighed. "I told you so," said Lapinette. The Wabbit ran his paws through his fur, then gestured in the air. "What's this for a sack of hammers ..?"
at November 09, 2019