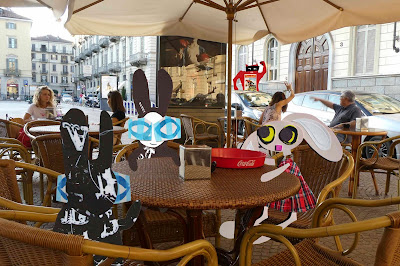 The team assembled at a favourite caffè in Piazza Giambattista Bodoni - and waited for Skratch. They didn't wait long. "Oh look! It's Skratch the Cat," shouted a man. "Ciao Skratch!" yelled a woman. Lapinette turned as customers welcomed the approaching figure. Skratch took a seat. "You're popular," observed the Wabbit. Skratch meaowed. "Must have been my popular lecture series." Lapinette twitched enquiring ears. "Foregrounding factors in signification," explained Skratch. Everyone applauded but the Wabbit tapped the table. "So tell us, Skratch. What kind of adventure did we just have?" Skratch laughed. "I'm tempted to say it was about the semiotics of light." Wabsworth nodded sagely. "My thoughts exactly. Typically absurd, the adventure's narratology configured around light itself." Lapinette rummaged under her frock for a spare copy of Samuel Beckett's Comment c'est, L'image, which she kept for reading emergencies - and lifted a paw. "The light followed, illuminated and ultimately reversed the adventure's absurdist flow." Wabsworth laughed heartily. "So the Wabbit would like to be indifferent to the universe, but the universe is not indifferent to him." The Wabbit nodded his head in agreement. "I think I'm somewhere between being and nothingness." He pointed at the empty tray and then raised a paw for service. "And only halfway to an aperitivo."
at November 15, 2019