4. The Wabbit and the Mobius Snail 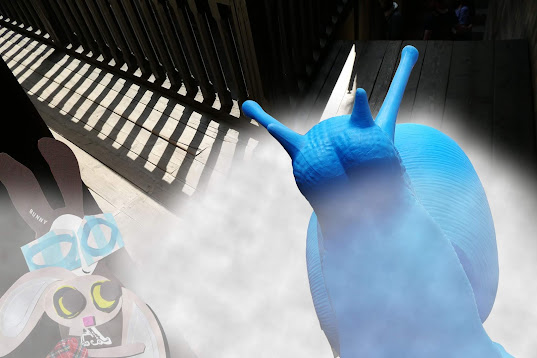 The fog cleared and there stood a familiar figure. "What are you doing on my strip, Wabbit?" The Wabbit and Lapinette breathed a sigh of relief. The Wabbit began to tell the story but Snail wiggled his antennae in dismissal. "Please don't burden me with a long explanation. You're here now." The Wabbit grinned. "Well why are you here, my slithering friend?" The clouds of gas abated a little and Snail's head became clearer. "This is my Mobius strip and I am here to practice keep-fit mathematical exercises." Lapinette laughed out loud. "Are these clouds your gaseous snail goo?" Snail inflated his chest and raised his shell. "Yes indeed, they represent my considerable physical efforts." "How do we get off the strip?" asked the Wabbit, "We've lost our orientation." Snail gestured with his antennae. Vapour swirled to reveal a shadowy stairway. "You must understand that the strip is a topographical construct," he said, "So please take the topographical stairs. But be careful - they're a bit one sided." "Where do they go to?" asked Lapinette. "A simply-connected domain," replied Snail. "Where's that exactly?" sighed the Wabbit. "Near the river," laughed Snail. But Lapinette was already climbing the stairs and calling down to the Wabbit. "I can see our house from here." The Wabbit made for the stairs, but just before he started to climb, he turned to Snail and said. "I don't suppose you ever lose your way ..?"
at November 11, 2019