2. The Wabbit and the Banister Rail 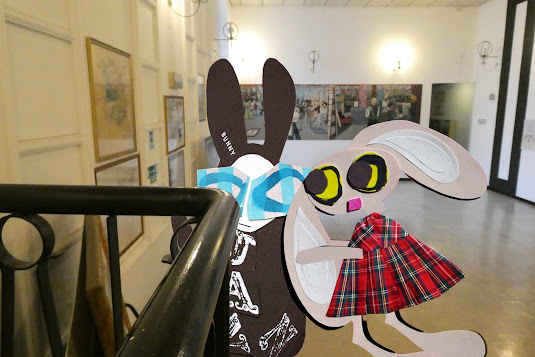 The Wabbit and Lapinette forgot all about the talking beam on the river and went to the movies. But when they came out, the Wabbit stooped to examine a banister rail. "It's a good thing all wood doesn't talk." He shook it until the supports rattled. "Can I help you find your way out?" said the rail. Lapinette looked at the rail in a quizzical way. "How many are you?" The Banister shook himself. Light glistened from his varnish. "Many? Why?" came the response. The Wabbit tapped the rail lightly with a paw. "We met one of your number down on the river." "Him!" yelled the rail, "Is he still floating around?" Lapinette smiled. "He's on his way to Venice?" The rail almost arched in the air. "He's never gone further than the weir. He's a layabout. A rough sort." The Wabbit and Lapinette looked at each other and winked. "Oh, you don't believe me?" The rail shook with anger. "He's not like us. We're carefully-prepared ... and delicately moulded." The Wabbit hopped back and caught Lapinette's eye. He gestured to the stairs with his ears. "Urgent appointment," he said. But the banister rail wouldn't stop. "I've met film stars you know. William Shatner ran his hand along my varnish." "Me too," said Lapinette. The Wabbit hopped forward again and dragged Lapinette by the paw down the stairs. "I go all the way down!" yelled the rail. The Wabbit and Lapinette ran across the foyer and into the street. "That banister better belt up," shouted the Wabbit, "or he's dead wood!"
at November 06, 2019