7. The Wabbit and a Hasty Departure 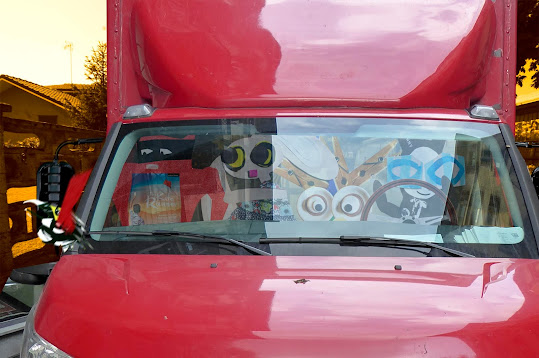 The truck flew down the road with the Wabbit at the wheel. He was smirking and that made Lapinette nervous. He made more speed and the houses seemed to fly past. "There's another!" shouted Lapinette. Skratch stretched out a paw and calmly batted a Skuttle away. It burped as it went and he watched it tumble onto such sidewalk as there was in Casorzo. "Take that for your trouble," he purred. The truck rattled on, but Lapinette was waiting for something and she looked back. Suddenly the sky went red and a dull boom shook the windows. She turned to look at the Wabbit. The Wabbit shrugged and grinned. "Too much ethanol?" asked Lapinette. "Just enough," said the Wabbit; "Old wine, vapour and a spark." "Kaboom," said Skratch stoically. For once Peggy was quiet. Lapinette nudged her. "Anything to flog?" said Peggy with a weak croak. "I have something," smiled the Wabbit. He took a corner at speed and they all clung on. Peggy remained quiet. "Oh Peggy, I'll ask," said Lapinette. "Wabbit, what do you have?" "Well," said the Wabbit. "I have a red second hand truck - possibly stolen and subsequently treated badly." Peggy remained quiet, but Lapinette touched a wing gently. "Deal?" "No deal," said Peggy, "we have to put it back." Skratch began to meaow. "In my old days ..." Lapinette pointed a paw. "We don't want to know about your misspent youth, Skratch." But Peggy wanted to know. "Skratch - did you buy and sell?" "I was in the acquisition business," purred Skratch.
at September 09, 2017