8. The Wabbit and the Explanation 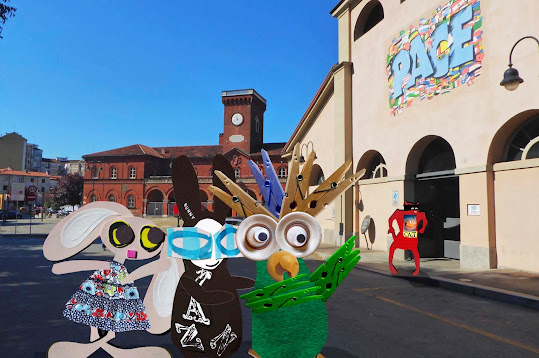 With the truck back where they found it, the Wabbit was desperate for an explanation. "Peggy," he said; "What do you do with all the stuff you buy and where the Binky do you put it?" Peggy took them on a walk that led through the market to an old building - and she pointed to a colourful sign that said "Peace." Skratch the Cat went over to the door and peered in. "It's full of things, Wabbit," he shouted. "What kind of things?" yelled the Wabbit. "All sorts of useful things," replied Skratch. Peggy ruffled her pegs. "People flog me things and I bring it all here." Lapinette began to understand. "It's an organisation for charity!" Peggy flapped her wings and nodded. "It's for the homeless, the immigrants, the unemployed - all the poor people that have no stuff." Now the Wabbit got it. But there was one more thing he didn't grasp. "Why don't you just give them money?" Peggy looked at him in astonishment. "That would be no fun for a bird like me. Anyway, I'm helping people recycle their stuff." The Wabbit still looked puzzled but Peggy was adamant. "If they sell things to me, they don't really need them." Skratch the Cat continued to look in the doorway and he yelled out. "It's true, Wabbit. People keep far too much stuff they don't need any more, stuff other people need." The Wabbit suddenly grinned an enormous grin with all of his 28 teeth. "Peggy, you're a Saint!" Peggy fluffed up her pegs and sang. "There'll be stuff for every creature. When the Saints go marching in."
at September 11, 2017