6. The Wabbit and the Skuttles' Desire 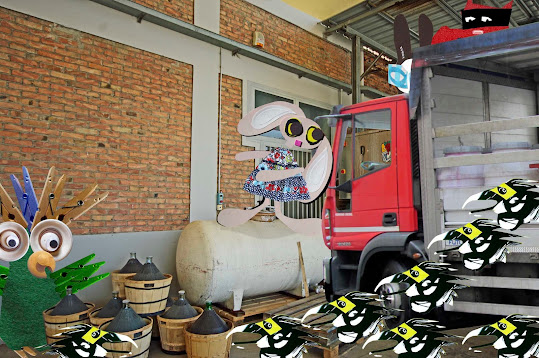 Lapinette waved the Skuttles out and they fell on Peggy's wine like a pack of wolves. "Spo-de-ode!" they cried. But one looked around. "This place looks familiar." The rest didn't care and they tried unsuccessfully to open the flasks. "Who's got an opener?" asked a Skuttle.  No opener could be found but they continued to search for one. "Maybe if we sing," suggested a Skuttle, "then the flasks will open by themselves." "Dusty wine at the end of its time," sang one. "How much per flask for that ratty old wine?" warbled the others. Peggy flounced her wings and chirped. "I only buy, I never sell." The Skuttles scoffed. "We'll take your wine and we'll drink it fine. We'll even put it where the sun don't shine." The Wabbit crept into the cab of the truck and took the brake off. The truck rolled backwards silently - and as it rolled, Peggy, Lapinette and Skratch the Cat jumped in. Peggy threw an opener from the window and the Skuttles lost no time. They were drunk as skunks in two minutes. The truck gathered pace as it rolled backwards down the incline. The Wabbit suddenly started the engine and swerved in a highly aggressive manoeuvre that made the Skuttles turn. But they were too inebriated to do a thing. So they continued drinking. "Spo-de-ode Spo-de-ode, drinkin' wine," they chanted. "Take the wheel, Lapinette," said the Wabbit. He dug in his fur and found what he wanted. "What happens now?" asked Peggy. "Just you wait," smiled Lapinette.
at September 07, 2017